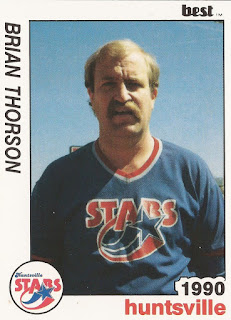 In a 2008 feature on Stockton Ports clubhouse manager Vic Zapien, team trainer Brian Thorson could only offer praise, according to The Stockton Record.

"I've often said I have a lot of the jobs that no wants to do, but Vic has the jobs I don't want to do," Thorson told The Record with a laugh. "If we go on a road trip and come back late, with a game the next day, he'll be here until 4 a.m., get a few hours' sleep and come back. He's a very dedicated person."

Thorson could be described as dedicated himself. By 2008, he'd spent three decades in the game as a trainer, tending to player injuries and player conditioning. He'd worked at single-A and AA, spent much of his time in the Athletics system and even saw a World Series with the Brewers.

The trainer has also earned the appropriate nickname "Doc" Thorson.

His long career as a trainer is continuing into 2017, as he returns to serve as trainer for the Athletics' single-A Beloit Snappers.

Thorson's long career in baseball began in 1979, having graduated from the University of Wisconsin at LaCross. He served that first year at AA Holyoke in the Brewers system.

The Brewers soon needed him enough to call on him in 1982. His 1990 Best card notes he worked as an assistant trainer for the Brewers during the World Series that year.

In 1996, he served as trainer at single-A West Michigan as the club won the Midwest League championship.

Along the way, Thorson has served with the Athletics at short-season Vermont, single-A Burlington and Kane County, high-A Stockton, along with Huntsville and Midland, according to MiLB.com.