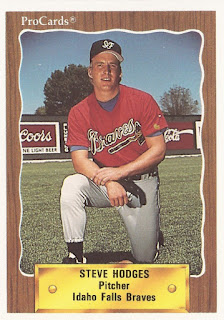 "It's in his blood," the father told The Times Colonist. "He's always loved to play, even at an early age. He has improved over time but I know for a fact it has involved a lot of hard work behind the scenes."

Jesse Hodges' hard work has gotten him a four seasons in the minors with the Cubs. Helping him get there was a father who himself played in the minors. The father's career, however, was limited to a single campaign.

Steve Hodges' brief career began and ended in 1990, signed by the Braves as an undrafted free agent out of Parkland Secondary School in Sidney, B.C., Canada.

In his native Canada, Hodges pitched for the national team in the 1987 Intercontinental Cup.

Hodges played his year at rookie Idaho Falls. The pitcher got into 25 games, all in relief. He went 3.1 innings in one July game, giving up a single hit. That outing helped Idaho Falls continue a winning streak and move within a half game of division-leading Salt Lake, according to The Deseret News.

"It's quite fun coming to the ballpark," Hodges told The News afterward.

Hodges soon returned home to Canada and both he and his father former semi-pro player and scout Lowell Hodges helped Jesse to his career in the pros, according to MLB.com. Jesse hodges played 2016 at single-A South Bend and high-A Myrtle Beach.