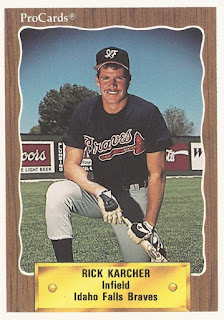 Rick Karcher transferred to Henry Ford Community College and his coach there couldn't have been happier, according to The Westland Observer.

Karcher only led the team in home runs, RBI and runs scored, The Observer wrote.

"He's just a hard-working kid and the other day he hit one of the longest homers I've ever seen," head coach Stu Rose told The Observer in May 1989. "It was just a colossal shot. They (the scouts) like his power."

Karcher went on to sign as a pro, but his career ended up being brief. He saw three seasons, making it to high-A, but not higher.

Karcher's pro career began in 1990, signed by the Braves as an amateur free agent out of Henry Ford in Michigan. He played his high school ball at North Farmington High School outside of Detroit.

At North Farmington, Karcher gave up two hits over 4.2 innings in a May 1987 loss. He also knocked a two-run triple.

With the Braves, Karcher started with the rookie Idaho Falls Braves as a first baseman. He hit .304 over 68 games, knocking six home runs.