Pat Gomez, Did Whatever - 4 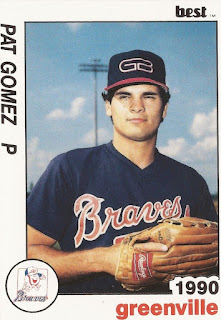 Pat Gomez returned from injury in August 1995 and none-to-soon for the Giants, according to The San Francisco Examiner.

After being out with a strained rib cage, Gomez arrived back to a bullpen in need of his left-handed services, The Examiner wrote.

"Not that I'm the solution to the problem, but it's tough to watch," Gomez told The Examiner of the Giants' current relief problems. "It breaks your heart. It absolutely breaks your heart. The guys are trying so hard out there. I'll do whatever Dusty wants - long, short or bring the water."

Gomez got into 18 total games for the Giants that year, his third season with time in the bigs. It ended up being his final big league season, Gomez doing what his manager wanted in a total of 71 major league games over his career.

Gomez' career began in 1986, taken by the Cubs in the fourth round of the draft out of San Juan High School in California.

Gomez started with the Cubs at rookie Wytheville. He moved to single-A Peoria for 1987, then single-A Charleston for 1988. After making AA Charlotte briefly in 1989, Gomez moved to the Braves and AA Greenville for 1990.

Gomez stayed with the Braves system for three seasons, through 1992. He first made AAA Richmond in 1990 and returned there for parts of 1991 and 1992.

He arrived with the Padres for 1993 via two trades. He also made the majors. He pitched much of his career to that point as a starter. With the Padres, though, he moved to relief. He got into 27 games, starting one. He picked up one win, two losses and a 5.12 ERA.

Gomez signed with the Giants for 1994 and he got into another 26 major league games and turned in a 3.78 ERA. To start out 1995, Gomez soon ran into his rib cage injury.

"It started barking in Colorado," Gomez said of his injury, according to SFGate.com. "It started in my rib and traveled right down into my hip. It's still pretty sore."

Gomez then made it back by August to finish out his big league career.