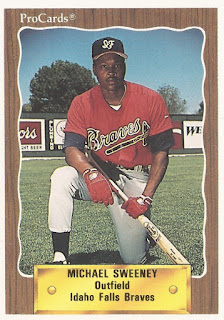 Michael Sweeney misplayed the ball in this August 1990 game and it led to two runs, according to The Deseret News.

Sweeney played shallow, the ball went under him and the runners on first and third both came around to score in a game his Idaho Falls team went on to lose 10-2, The News wrote.

"The first error hurt real bad, especially when you start out with men on first and third and score one," Sweeney's manager Steve Curry told The News afterward of Sweeney's miscue. "That sets you back."

Sweeney's brief pro career began in 1989, signed by the Braves as an undrafted free agent out of Lamar University.

He went to Lamar University out of Austin LBJ High School in Texas, making the school's athlete Hall of Fame. He also appears to have played some football.

With the Braves, Sweeney played his first season between the rookie Gulf Coast League and rookie Idaho Falls. He got int0 27 games between then and hit .200. He played entirely in the outfield.