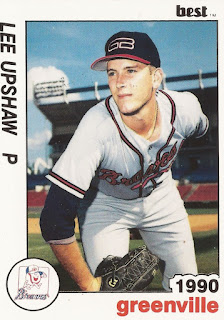 Lee Upshaw and his Durham Bulls teammates filed into a theater in the summer of 1988 to take in the movie version of the Bulls, 'Bull Durham,' according to The Los Angeles Times.

One scene in particular struck Upshaw, the son of major leaguer Cecil Upshaw, and his teammates, according to The Times, when when he slumping Crash Davis got called into the office.

"We all sort of eyeballed each other, knowing that's reality," Upshaw told The Times. "That's every player's fear - to be released."

Upshaw played as a professional for seven seasons, pitching for a single organization in the minors. In the end, though, his final release came short of the majors. He made AAA, but not the bigs.

Upshaw's career began in 1988, signed by the Braves as a non-drafted free agent out of the University of Kentucky.

He returned to Greenville for 1990. He also got a brief look at AAA Richmond that year. He picked up the loss in a July game for Greenville, allowing five runs in three innings. For Richmond, he started five games and went 0-3, with a 6.17 ERA.

Upshaw played 1991 back at Greenville and again in 1993. In between and in 1994, he played in Mexico. The book Baseball at the Border includes some accounts of Upshaw's time in Mexico. His time in 1994 marked his final in-season performance.

In spring 1995, Upshaw dealt with the sudden loss of his father, as well as playing that spring. Upshaw's father played nine seasons in the majors. He told The South Florida Sun Sentinel his father's passing put everything in perspective.