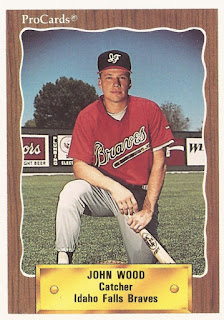 Members of the 1989 Texas A&M conference championship team returned to campus in 2009 to mark the 20th anniversary of the feat, according to 12thMan.com.

Among those returning was catcher John Wood.

Wood turned pro in 1990. He got into a single season, playing that year in rookie ball.

Wood's career began and ended that year in 1990, signed by the Braves as an amateur free agent out of Texas A&M.

With the Braves, Wood played the season at rookie Idaho Falls. He got into 32 games, mostly as catcher. He hit .182, picking up three doubles and two stolen bases. Those numbers marked the extent of his pro career.

Wood's nephew Brandon Wood later attended Texas A&M, according to a poster at TexAgs.com. His nephew played four years but didn't go on to a pro career.