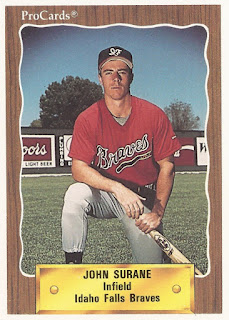 Customer loyalty and building relationships with those customers are both important John Surane, he told the digital marketing site CMO.com in August 2015.

"We've seen through our loyalty program that half of our transactions come from returning customers," Surane told CMO. "As a brand that stands for helpful, award-winning customer service, it's rewarding to see that we are offering them an amazing experience. I consider that a win!"

Years earlier, Surane was helping with different kinds of wins as a baseball player in the minor leagues. Surane spent two seasons as an infielder in the Braves system and with an independent team. He made it to high-A, but didn't make it higher.

Surane's brief minor league career began in 1990, signed by the Braves as an amateur free agent out of Northeastern State University in Louisiana.

At Northeastern, Surane scored 129 runs over his career, still good for sixth all-time at the school. He also drew 113 walks, stole 52 bases, both also still top-10 all time. He made the school's Hall of Fame in 2010.

Surane soon moved into the business world. He moved to Ace in 2009 after previously working in merchandising at Home Depot and Skil Power Tools.