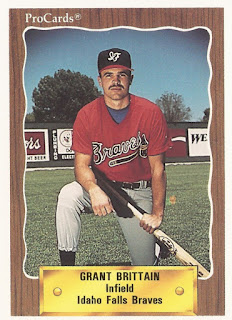 Pirates scout Grant Brittain had a few rough drafts, according to The Pittsburgh Post-Gazette, drafts where he didn't get a single player picked.

Then, in 2001, he got his club to take a player in the 20th round named Zach Duke, a future major league All Star for Pittsburgh.

"It always makes you feel good when you sign any player," Brittain told The Post-Gazette during Duke's breakout rookie season in 2005. "If he goes on to do well, it's even better. If he goes on to do what Zach is doing ... it's just tremendous. I'm as proud as I can be."

Brittain turned scout after his own brief career as a player. Brittain played three seasons in the minors. He made it as high as high-A, but he didn't make it higher.

Brittain's playing career began in 1990, signed by the Braves as an amateur free agent out of Western Carolina University.

He earned first-team All-America honors at second base with Western Carolina in 1990.

Brittain started with the Braves at rookie Idaho Falls. He hit .274 over 67 games. He knocked a key base hit in a July win over Salt Lake.

Brittain soon turned to scouting. By 1997, he was with the Pirates. He's also credited as spending time with the Brewers and Tigers.