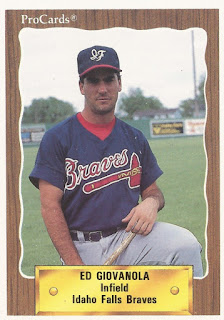 Pressed into service due to injury in August 1996, Ed Giovanola showed he belonged.

He went 4 for 7 over two games for the Braves and hoped to stay until regular shortstop Jeff Blauser returned.

"I'm not looking to do anything spectacular," Giovanola told reporters afterward, "but I think I can help the team win."

Giovanola eventually worked to help big league teams win over five seasons. He saw parts of three seasons with the Braves and two more with the Padres. He got into a total of 218 games over his big league career.

Giovanola's career began in 1990, taken by the Braves in the seventh round of the draft out of Santa Clara University. He played his first season between rookie Idaho Falls and single-A Sumter.

He spent 14 games in Atlanta in 1997 and the rest at AAA Richmond. He picked up three RBI, two on a triple, in a June game for Richmond.

That spring, Giovanola hoped his batting stance might give him a leg up.

"If (Braves manager Bobby Cox) wants to take a left-handed hitter, it seems I'd be the guy to consider," Giovanola told Morris News Service.

Giovanola moved to the Padres for 1998, taken off waivers. He also had his best season yet in terms of games played. He got into 92 games for San Diego and hit .230.

"A shock," Giovanola told The Las Vegas Sun of getting called back. "But it's a nice shock. I didn't think I did very well down here. ... I just assumed I'd be here all season."