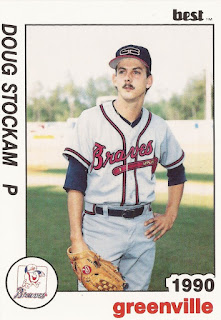 Doug Stockam had a good year in 1988 and he had good crowds to pitch in front of.

That was because Stockam pitched that year for the single-A Durham Bulls. It was the same year that the classic film named for the team was released, according to WTSP.com.

"There were Triple-A teams that didn't draw as many fans as we did that year," Stockam recalled to he Springfield, Mo., TV station years later.

Stockam went 8-3 that year, with a 2.52 ERA. He continued that success the next year at AA Greenville, but he couldn't continue it further. He played four seasons as a pro, never making AAA.

Stockam's career began in 1987, signed by the Braves as a free agent out of Missouri Southern State College.

At Missouri Southern, Stockam started 47 games over his four years, a school record. He also struck out a record 206 batters over his time there.

With the Braves, Stockam started at rookie Pulaski. He went 6-0 over 15 outings, seven starts. He also had a 1.68 ERA.

He got one win in a May game for Greenville. He picked up another win in the game that sent Greenville to the league championship series.