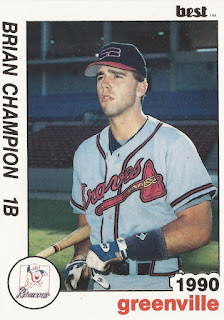 One of Centennial High School's rival pitchers won the Idaho Baseball Player of the Year award in 2015 and Centennial's coach Brian Champion could only give praise, according to The Idaho Statesman.

"His hitting, pitching and shortstop ability make him the complete ballplayer and the guy who can change a game at any time," Champion told The Statesman of the pitcher, Parker Price. "He is the definite leader of their team and the catalyst to them having an excellent year and winning the state title."

Champion used his own ability years earlier to make the pros as an infielder. He played six seasons, making AA, but not higher.

Champion's career began in 1986, taken by the Braves in the second round of the draft out of Corvallis High School in Oregon.

Champion started with the Braves in the rookie Gulf Coast League. He hit .251 in 56 games. He moved to rookie Pulaski for 1987. He hit .284 over 67 games and made the league All Star team.