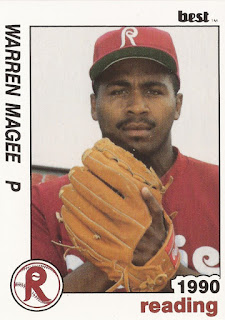 He pitched well enough to get the notice of the top brass in Philadelphia as they placed Magee on the club's 40-man winter roster that November.

Magee, though, couldn't keep it up. He pitched in two more seasons at Reading. He never made AAA or the majors.

Magee's career began in 1986, signed by the Phillies as an undrafted free agent out of Ferrum College in Virginia.

Magee started with the Phillies at short-season Utica. In 24 relief outings, Magee had a 4.12 ERA. In one early game, Magee threw 5.1 innings of relief and stuck out eight in a Utica win.