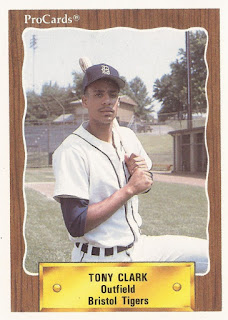 Tony Clark started his professional career slowly in 1990, but he didn't see that slow start as telling of his future in the game, he told The Detroit Free Press that August.

"If I continue to play the way I am, there will be no future," Clark told The Free Press. "But, with an earlier start and full season next year, I will improve."

Clark improved enough not only to make the majors, but to stick around for a while. Clark first made the bigs in 1995, then became a major league regular the next season.

By the time Clark concluded his career, he'd seen time in 15 major league seasons, made an All-Star team and gained a mention on the Hall of Fame ballot.

He's continued on in the game as the head of the Major League Baseballs Players Association.

Clark's career began that year in 1990, taken by the Tigers second overall in the draft out of Christian High School in El Cajon, Ca.

Clark played his first season at Bristol. He also held out for a college basketball career. On the baseball field, he got into 25 games and hit .164. On the basketball court that fall for the University of Arizona, Clark hurt his back, causing him to miss all of 1991.

Clark returned for brief baseball campaigns in 1992 and 1993, then saw his first full season in 1994. He also first saw AA Trenton and AAA Toledo. He also got healthy as he moved away from basketball.

"He looked as confident as he has all year," Tigers manager Buddy Bell told The Associated Press of that game. "He's so strong and feeling so confident. He's done a great job."

Clark hit a career-high 34 home runs in 1998, including a 450-foot shot to help win a June game. Clark continued with the Tigers through 2001, including earning his only All-Star appearaince his final season with the club.

Clark moved to the Red Sox for 2002, ending the year with an average of just .207. That July, Clark knocked a tie-breaking single.

"Sometimes the swing is perfect and the ball finds a hole. Sometimes it doesn't," Clark told The AP after that game. "Tonight it found a hole."

Clark played 2003 with the Mets, then 2004 with the Yankees. Clark arrived with the Diamondbacks in 2005, largely playing the rest of his career with the club. His final big league time came in 2009.

Clark finished out his career with more than 1,500 major league games played, 251 home runs and a career average of .262.

In 2013, Clark took over as head of the Players Association, having been involved in the union as a player. In March 2014, he explained to MLB.com his relationship with future commissioner and then-head negotiator Rob Manfred.

"I was at the table as an active player and in each bargaining session since I retired, so Rob and I have a relationship," Clark told MLB.com. "Any time there is respect between the opposing sides, it works in everyone's best interest. You go into every negotiation looking for an agreement, but you also know who you represent and you have to make sure you have their best interest at stake."
1990 Minor League Tally
Players/Coaches Featured: 2,430
Made the Majors: 994-40.9%-X
Never Made Majors:1,436-59.1%
5+ Seasons in the Majors: 415-X
10+ Seasons in the Minors:251
Posted by Steve78 at 11:18 PM