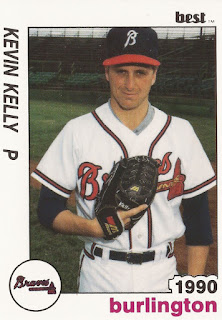 Kevin Kelly picked up two losses in 1989 for the single-A Sumter Braves, but those two losses were costly.

In those two outings, according to The Sumter Item, Kelly gave up a total of 12 earned runs over 8.2 innings of work. The result was an added run-plus to his Sumter ERA.

Kelly's career began in 1987, taken by the Braves in the ninth round of the draft, out of Wichita State University, though he didn't hit the field until 1988.

Kelly pitched at Wichita State from 1985 to 1987. His final year there, he got the dubious distinction of setting the school record for wild pitches in a season at 11. It's a number that has since been beaten once and tied six times.

With the Braves, Kelly started in 1988 in the rookie Gulf Coast League. He got nine outings, six starts, with a 3.96 ERA.

At Sumter, Kelly's first loss came in late June, Kelly giving up six in 4.2 innings of work. His Braves scored four runs, but couldn't erase the full deficit. Then, in August, he went four and give up six earned for his second loss.

Kelly returned to Burlington for 1990, spending much of his time in the bullpen. He got 34 outings, with seven starts. He won three games, saved one and had an ERA of 4.65. It was his final season as a pro.