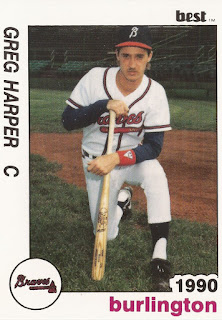 Sumter Braves starter Chad Smith gave up no earned runs over his first six innings of work in this April 1989 game and his catcher Greg Harper helped make that happen, according to The Sumter Item.

Harper threw out not one, but two runners trying to steal in a game Sumter went on to win by a score of 6 to 3.

Harper threw those runners out in his third season as a pro. He went on to see time in one more. He never made AA.

Harper's career began in 1987, taken by the Braves in the 30th round of the draft out of State University of West Georgia.

Harper started with the Braves at rookie Pulaski. He got into 45 games and hit .221. He moved to rookie Idaho Falls and single-A Sumter for 1988. He got into 64 games between them and hit .213.

In an April 1988 game, Harper came through with the bases loaded, knocking a two-run single. He then knocked in a run on a bloop single in another April game. The next month, Harper went 2 for 4 in a game with a run scored.