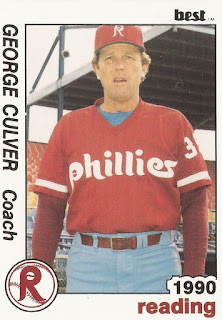 George Culver had been to the big leagues before as a player and he was fine with a return as a coach.

It was just the manager of the AA Reading Phillies wasn't focusing on that, he told The Reading Eagle in 1986.

"My goal is to do the best I can in the situation I'm in," Culver told The Eagle that July. "If that's managing a Double A club or a Rookie club, or a Triple A club, or being a pitching coach in the big leagues, it's all the same to me."

In a coaching career that spanned more than 15 years, Culver never did return to the majors. In his playing career, though, Culver spent nine seasons there.

On one night in 1968, he was one of the best in the game, pitching a no-hitter for the Cincinnati Reds.

Culver's career in baseball began in 1963, signed by the Yankees as an amateur free agent out of Bakersfield College in California.

Culver started at single-A Shelby and Greensboro. He moved to the Indians for 1964, making AA Charleston and AAA Portland. He then debuted with the Indians in Cleveland in 1966.

Culver got five outings his first year in Cleveland and then 53 mostly relief outings in his second. He moved to the Reds for 1968 and turned starter.

On July 29, 1968, the starter Culver no-hit the Phillies. He did it with an upset stomach.

"I really got nervous in the seventh," Culver told reporters afterward. "I'd never even come close to pitching a no-hitter in my life. I didn't know how to act."

Culver split time between starting and relieving in 1969. He then largely relieved through the end of his career.

He moved to the Cardinals to start 1970, then went on to the Astros mid-season. He then played for the Dodgers and Phillies in 1973 and ended his major league career in 1974 with the Phillies. He then finished out his playing career in 1975 in Japan.

In March 1972, Culver explained to The Victoria Advocate his outlook on where and how his team used him.

"My attitude going into spring training every year is the same," Culver told The Advocate. "I want to help the team whether it be shining shoes or as a starting pitcher."

By 1978, Culver was in the minors, managing Bakersfield. By 1981, he was pitching coach at AA Reading. He then managed at AAA Oklahoma City in 1982 and later managed at AAA at least two other seasons. He's last credited as managing at AAA Scranton in 1993.

He later returned to Bakersfield and started raising money for local baseball programs, according to Bakersfield Life. He estimated he'd raised more than $1 million for programs from college down to youth through an organization called the Light Brigade.

"It's been fun," Culver told Bakersfield Life in 2013. "Somebody has to do it. If our group doesn't do it, then it goes undone. We're more than happy to help ... This is an unbelievable community for helping youth baseball, and any other worthy type thing."