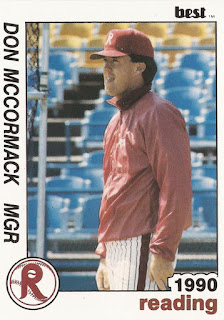 "He's going in the right direction to the majors," McCormack told Knight Ridder. "Already, this kid is an accomplished catcher."

Lieberthal went on to make the majors two years later. He then stayed for 14 seasons.

McCormack was once a minor league catcher himself, en route to the majors. McCormack's stay, though, consisted of just two short stays, five total games. But he almost played a role in deciding a divisional race.

McCormack then went on to a long career as a manager in the minors, as well as in independent ball.

McCormack's career in baseball began in 1974, taken by the Phillies in the fourth round of the draft out of Omak High School in Omak, Wash.

McCormack started at rookie Pulaski. He then spent the next three seasons at short-season or single-A. He made AA Reading and then AAA Oklahoma City in 1978.

McCormack debuted Sept. 30, then got into his second game Oct. 4. That Oct. 4 game resulted in the question of why, in the midst of a possibly division-deciding game, Montreal didn't pitch around future Hall of Famer Mike Schmidt to get to the untested rookie McCormack.

It was a question asked even 15 years later. "People are always bringing it up," McCormack told Knight Ridder in August 1995.

After Schmidt's home run, McCormack did bat. He also got his first major league hit. He returned for another three games in 1981, marking the extent of his big league career.

McCormack's playing career then ended the next season, with a season at AAA with the Tigers.

By 1988, McCormack was back in baseball and back with the Phillies, as the manager at short-season Batavia. He managed there for two seasons, then moved to AA Reading for 1990.

In May 1991, still with Reading, McCormack was happy with his team's progress, compared to a difficult previous year.

"I think there's a little more talent," McCormack told The Reading Eagle. "But I think the big thing is these guys want to play. They want to win and they believe they can."

McCormack continued with Reading through 1993. He then spent two seasons at Clearwater then three as a roving instructor for the Phillies.

McCormack then made the jump to independent ball. He served as pitching coach with Long Island in 2000 and became the team's manager for 2001. He continued with Long Island through 2007, his last recorded season. He never made the majors as a coach.

In 2001, as he started work with Long Island, McCormack reflected on his time in the game to Newsday.

"There's something about professional baseball that gets under your skin and gets in your blood," McCormack told Newsday. "Gosh, you really can't put an actual figure or fact to the question, 'Well, why do you?' It's because there's just something about it. It just grabs a hold of you and it's
hard to get away, it's hard to stay away. A lot of guys say, 'OK, I've had enough of that stuff' and go try another life. Boy, it's hard to do."