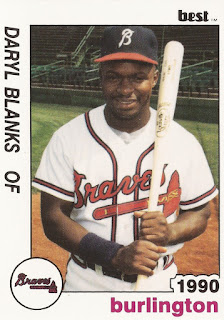 Daryl Blanks hoped to make his Hudson River Whalers youth baseball team competitive with teams in the weather-favored South and the West.

And he was trying to do it in weather-challenged Upstate New York.

"That's the main goal of the Whalers," Blanks told The Hudson Register-Star in 2011, after his 14U team lost in the league championship game, but looked forward to another tournament. "Play a lot of games."

Blanks knew what it was like to come out of the Northeast. He did it and turned pro. His professional career, though, lasted just three seasons, never making AA.

Blanks' professional career began in 1988, taken by the Braves, out of Grambling State University. He went to Grambling out of Hudson High School.

In college, Blanks played his summers in nearby Schenectady, in the Northeast Collegiate Baseball League's Mohawks. Overall, he played three seasons there.

Blanks moved to single-A Burlington in 1989, but his average dropped. Over 93 games, Blanks hit .209. His stolen base total also dropped to four.