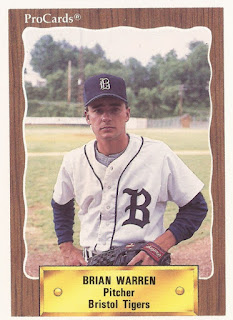 Brian Warren's Chiba Lotte Marines got off to a slow start in 2000, enough so that the closer Warren worried about his effectiveness when he'd finally be needed, according to The Japan Times.

"If you don't get me some work while we're 10 runs down, you'll find out when we're one run ahead," Warren told the team, according to The Times.

Warren spoke having saved 30 games for the club the previous year. He went on to save 16 for the Marines that year, his 11th as a pro. In all, he got into 14 pro seasons. He played three of those sometimes controversially in Japan and five at AAA. He never saw time in the majors.

Warren's career began in 1990, taken by the Tigers in the 43rd round of the draft out of New Mexico State University.

Warren started with the Tigers at rookie Bristol and short-season Niagara Falls. He went 2-6 between them, with a 2.17 ERA.

He moved to single-A Fayetteville and high-A Lakeland for 1991. He picked up his seventh win in eight decisions in an August game.

Warren then moved to the Reds system and AAA Indianapolis for 1994. He picked up a relief win in an August game, pitching a scoreless eighth inning.

He stayed at Indianapolis for three full seasons, never seeing Cincinnati. He played 1997 with the Rangers at AAA Oklahoma City. He then made the jump to Taiwan,

Warren started with the Chinatrust Whales. He went 4-1 before moving to Japan and Chiba Lotte. He started there with a 0.93 ERA over 24 outings. He saved three.

Warren then saved his 30 games in 1999 for the Marines. But he soon gained a certain reputation, according to the book The Meaning of Ichiro. In 2000, he got fined for giving the middle finger. He also was accused of scuffing baseballs, according to he book.