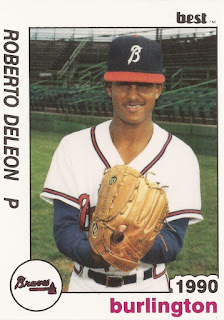 Sumter Braves manager Ned Yost called on Roberto DeLeon this night in June 1989, but he didn't get much improvement.

Called in for starter Scott Grove, DeLeon went 1.1 innings, giving up three earned, according to The Sumter Item.

"DeLeon was getting the pitches up just like Grove," Yost told The Item. "Our relievers just haven't been doing the job lately."

DeLeon was in his first season as a pro that year for Sumter, and he ended up finishing the year with a respectable ERA of 3.22.

DeLeon, though, only saw time in two more seasons. His second season ended with an off-the-field injury suffered playing basketball with teammate and future major leaguer Javy Lopez. DeLeon got into only three more games after that.

DeLeon's career began in 1989, signed by the Braves as an undrafted free agent out of his native Dominican Republic.

With the Braves, DeLeon tried to focus on the game and he tried to do it despite a language barrier. He told The Item in August of the difficulty in simply ordering food.

"I felt weird because it was my first order in America," DeLeon told The Item. "I ordered a Big Mac, but it was hard to know what it was. I knew I ordered a hamburger, but I didn't know what was in it."

On the field, DeLeon went 2-4 over 34 outings, seven starts. In one late August game, DeLeon went six innings and didn't give up a run. He got a no-decision for his efforts.

But, as Lopez told in his book "Behind the Plate," it was an injury that ended DeLeon's season. They were playing basketball and Lopez got a rebound. DeLeon tried for it, too, but Lopez, ball in-hand, swung his arms. The result was a DeLeon broken finger.

After they told Burlington manager Jim Saul a different story about how it happened, DeLeon went to the hospital.

"The bone was out of the skin. They had to perform surgery," Lopez wrote. "He never really could pitch again. I feel awful about that."

DeLeon returned to the mound for 1991, but it was a brief return. In three outings, 5.1 innings, at high-A Durham, he gave up three earned. They were the last outings of his career.