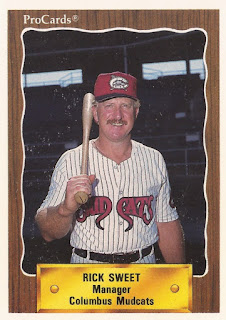 Speaking to The Tucson Citizen in 1995, Rick Sweet explained what led him to be a minor league manager.

Sweet soon returned to manage in the minors and he's continued in the years since. He's spent a total of 17 seasons through 2016 at AAA and seven at Louisville. In 2016, he served as manager at AAA Colorado Springs.