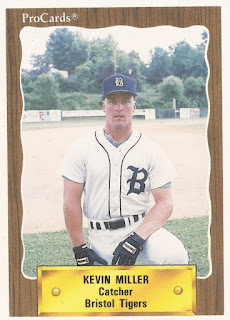 On the occasion of old local football coach Joe Miller's passing in 2016, a Sacramento Bee columnist pulled out an old quote from the coach about his son, Kevin Miller.

The son had played for the Delta High School team from 1984 to 1986, The Bee wrote, eventually making quarterback.

"My greatest joy," Joe Miller once told The Bee columnist, "was coaching Kevin at Delta. But it wasn't always easy. Sometimes he ran his own plays, and fortunately, they usually worked."

Kevin Miller played both football and baseball at Delta. He went on to play baseball in college and in the pros. His pro career spanned three seasons, making it to single-A, but no higher.

Kevin Miller's pro career began in 1990, taken by the Tigers in the 37th round of the draft out of Chico State University in California.

At Chico, Miller hit .408 in 1987, helping his team to a 35-15 record, according to the school. He continued in 2009 to hold the school marks for total bases and doubles and he remained in the top 10 in four other categories, including home runs and RBI.

Miller also played football at Chico, twice named captain and winning all-conference honors, according to the school. Miller played well enough in both baseball and football to be named to the school's Hall of Fame in 2009.

Miller started with the Tigers in 1990, playing at rookie Bristol. He played the season between catcher and outfield, getting into 61 games. He hit .269, along with five home runs and 22 RBI.