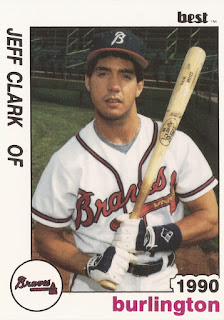 The only player standing in the way of the Gulf Coast League Mets and a no-hitter this day in June 1988 was Jeff Clark.

In the top of the fifth, with two outs, Clark legged out an infield single. It was the only GCL Braves hit on the night, according to The Sarasota Herald-Tribune.

That was one of 18 hits Clark picked up in the GCL over 27 games in his first year as a pro. He went on to play four seasons. He never made AA.

Clark's pro career began that season in 1988, signed by the Braves as an undrafted free agent out of Walton High School in Marietta, Ga.

With the Braves, Clark played his first season between the GCL and single-A Burlington. Clark got 11 games at Burlington, hitting .257.

For 1989, Clark played at rookie Pulaski and returned to Burlington. He hit .263 on the year, with one home run and 20 stolen bases. He also knocked in 23.