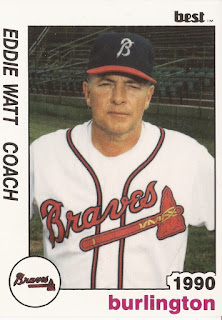 Early arm problems slowed Eddie Watt's trip through the minors. They even got him thinking about quitting, he told The Associated Press in 1966.

Once he got beyond them, though, he excelled. And he did it in the bigs.

"It's tough to jump to any conclusions," Watt told The AP that August. "A half year is a long way from being successful, but in my own mind I think I can play here."

Watt ended up playing there for a decade. Watt spent eight of his 10 seasons with the Orioles, helping his team to the World Series four times as one of the club's top relievers.

Once his playing career was over, Watt then went on to a career as a coach and manager in the minors. In that career, he worked to help other players on to play in the bigs.

Watt's career in baseball began in 1961, signed by the Orioles as an amateur free agent out of the University of Northern Iowa. He went to Northern Iowa out of Iowa City High School.

In 1969, Watt got into 56 games for the Orioles, saving 16 of them and ending with an ERA of 1.65. He also got his first World Series time that year. He gave up one earned run in three innings, but got the loss in the deciding Game 5.

Watt turned in a 53-outing, 3.25-ERA performance in 1970. But in Game 4 of the World Series, Watt blew a save, leading to the Orioles only loss of the series.

Despite continuing to pitch well over the next three seasons, Watt ended up being regularly booed in Baltimore, according to The AP.

Watt played his final two seasons with the Phillies and the Cubs. Over his 10 seasons, he got into 411 games, saved 80 games and had a career ERA of 2.91.

In spring 1974, Watt told The AP about his satisfaction at being a reliever.

"I never want to start the rest of my pitching life," Watt told The AP. "I'm happy in the bullpen. It's the only place I pitch. I'm physically and emotionally made up for relieving."

Watt started his coaching career by 1978, managing high-A Reno. He moved to AA Amarillo in 1980. In 1990, he served as pitching coach at single-A Burlington. He's last recorded as working as pitching coach in 1999 in the rookie Gulf Coast League. He never made the majors as a coach.

In 1982, as a minor league coach for the Phillies, Watt told The Bend Bulletin his intentions.

"I want to stay in baseball and I've wanted to stay in baseball since I signed my first contract in 1961," Watt told The Bulletin. "I like working with the young people when you can watch them advance week-by-week, as players, as professionals, as human beings."