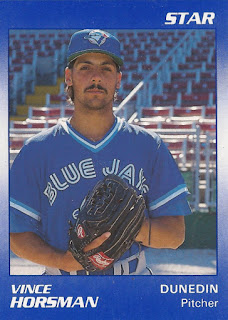 Blue Jays prospect Noah Syndergaard developed a slider at single-A in 2012, but his pitching coach Vince Horsman initially restricted its use, according to MiLB.com.

Syndergaard could only use it five times, MiLB.com wrote that June. Syndergaard still needed to work on his fastball.

Horsman spoke from experience. Horsman spent parts of five seasons in the majors with the Blue Jays, Athletics and Twins. Three of those seasons came with extended time in the bigs.

He has since gone on to a post-playing career as a coach in the minors, helping send pitchers like Syndergaard on to the majors.

Horsman's career began in 1984, signed by the Blue Jays as a free agent out of high school in Nova Scotia, Canada.

Horsman started with the Blue Jays at rookie Medicine Hat in 1985. He moved to single-A Florence in 1986 and first made AA Knoxville in 1988. He spent most of his time working in relief.

Horsman continued between single-A and AA into 1991. That September in 1991, he made the jump to Toronto. He got into four games for the Blue Jays, giving up no runs in four innings of work.

He then returned to the majors for 1992, but with the Athletics after Oakland took him off waivers. Horsman stayed in the bigs all year, getting into 58 games and posting a 2.49 ERA.

That April, Horsman recorded his first major league save, going 2.1 innings while giving up just two hits. Afterward, Horsman tried to keep his achievement in perspective when speaking with The Associated Press.

"I'm not going to make a big deal of this and call a lot of relatives," Horsman told The AP. "I'll just come out tomorrow and try to do the job again if I'm called on. It's too easy to be humbled in this game."

He continued to pitch and try to get back, including time in Taiwan. His playing career finally ended in 1999 when he made the switch mid-season from player to bullpen coach with the Orioles at AAA Rochester.

"I'm very proud of my major-league career and the time I spent as a player," Horsman told The Baltimore Sun of the move. "But that's behind me now. I'm looking ahead."

The path ahead for Horsman included time as the Orioles batting practice pitcher in Baltimore. By 2006, he returned to the minors as a coach at rookie Pulaski. He spent four seasons at single-A Lansing, where he oversaw Syndergaard in 2012. In 2016, he's serving as pitching coach at AA New Hampshire.

In 2014 at Lansing, Horsman counted eight former Lansing hurlers he'd worked with who'd made it to the bigs, according to his hometown Halifax Chronicle Herald.

"That’s what the Blue Jays hired me to do, to develop kids," Horsman told The Chronicle Herald. "You're not going to develop everybody. Everyone you get your hands on is not going to get to the big leagues."