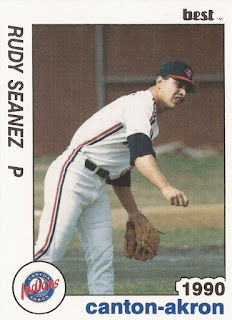 The Braves needed someone to close out the game and Rudy Seanez came in and did the job in July 1998, setting down four without giving up a hit.

It was Seanez' first save in three years, his fourth save over his big league career. It was also an example of Seanez doing what was needed.

"They're all big for me," Seanez told The Associated Press of the save after the game. "I'll do anything they want me to do. I just go out and pitch."

By the time he was done, Seanez did what was wanted of him in 17 total big league seasons, one that saw him play in the postseason four times and not throw his final professional pitch until he was 40.

Seanez' career began in 1986, taken by the Indians in the fourth round of the draft, out of Brawley Union High School in California.

Seanez started at rookie Burlington, playing his next three seasons largely at single-A. He played much of 1989 at single-A Kinston, got one outing at AAA Colorado Springs, then went directly to Cleveland.

With the Indians, and with hardly any experience above single-A, Seanez got into five games in relief that September, giving up two earned runs in five innings of work.

Seanez returned to the Indians for 24 outings in 1990, posting a 5.60 ERA, then five unsuccessful outings in 1991. Over his first five seasons with time in the majors, though, Seanez never got into more than 24 games.

He signed for 2006 with the Red Sox, telling reporters he still had plenty left, with an off season regimen of weightlifting and mixed martial arts, according to MLB.com.

"Just gaining control and command of my pitches," Seanez told MLB.com of his success. "I had that for a brief time in Atlanta (1998-2001), but I had a couple of injuries along the way that kind of sidetracked me a little bit. It was kind of tough to get back, but I feel like I've gotten back to the level I was at prior to these injuries. I just look forward to having some success there in Boston."

Seanez has since opened his own training academy, Seanez Sports Academy, in Imperial, Ca., near his hometown.