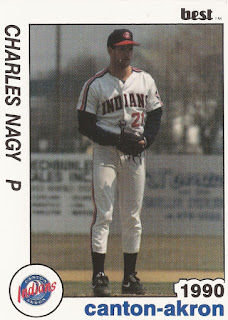 Coming off his first season with double digit wins and on his way to his second, Charles Nagy set down the Yankees in April 1992, doing exactly as he had done in his previous two seasons, and would do for the next decade.

"I know how to pitch in the big leagues," Nagy told The Associated Press after his 11-1 victory over New York. "You got to try to keep your concentration out there."

Nagy's career began in 1988, taken by the Indians in the first round, 17th overall, out of the University of Connecticut.

After playing out 1988 with Team USA, Nagy joined the Indians in 1989 at single-A Kinston. He moved up to AA Canton by the end of that year and major league Cleveland by the end of the next.

It was the first of 129 total big league wins for Nagy.

Then he ran into arm troubles. In 1993, Nagy started 2-5, with an ERA of 6.31 in nine starts. Shoulder problems, though, led to arthroscopic surgery in June. Nagy made it back, just for one game, though, at the end of the season.

"There's a lot of factors that go into my winning," Nagy told The Associated Press in June, after his 10th win, "and the bullpen is one of them. We get timely hits and the bullpen finishes the job."

Nagy and the Indians returned to the World Series in 1997. In another Game 3, Nagy went six innings, giving up another five runs. Then, in Game 7, Nagy came on in the 10th inning, finishing off that frame, but giving up the game-winning and series-winning run in the 11th.

Nagy came back for two more full seasons with the Indians, then injuries took their toll. He continued playing into 2003, last playing with the Padres.

After returning to the Indians in 2004 as a special assistant for baseball operations, Nagy hit the field again in 2006, becoming pitching coach with the Angels at AAA Salt Lake. In 2010, Nagy served as pitching coach at AAA Columbus. Then, in 2011, he returned to the majors as pitching coach for the Diamondbacks.

"He's very, very competitive," Gibson told The Connecticut Post in May 2012. "He has a real burning desire for excellence. He's got a great approach with his players. He's very calm about organizing his thoughts. You could see why he was a good pitcher, because he stays on a path. He doesn't get influenced by the pressure of things."