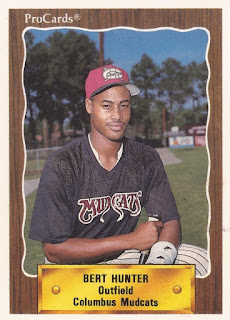 Taken by the Astros in the second round in 1985 out of high school, Bert Hunter had trouble adjusting to the pros, according to The Orlando Sentinel.

"Wooden bats are the biggest adjustment I've had to make," Hunter told The Sentinel that June. ''But it's starting to come around. For a while, it was a rude awakening. So was pitching.''

For Hunter, his bat never really came around. He hit .233 that year. He later made AA and then AAA, briefly. But he never hit well and he never made the majors.

He has since gone on to a career as a coach in college, serving in 2016 as an assistant coach at Willamette University in Oregon.

Hunter's career began in 1985, taken by the Astros out of Norte Vista High school in California.

Hunter started with the Astros in the rookie Gulf Coast League. He hit .210 in 56 games. He then moved to short-season Auburn and single-A Asheville for 1986, hitting .226 between them. In one May 1986 game at Asheville, Hunter knocked in two on a single and later scored.

Hunter first made AA in 1989 at Columbus, returning there for all of 1990. He moved to the Mets system for 1992, getting a single-game look at AAA Tidewater.

He then played 23 games back at AAA for the Mets in 1993, playing the rest of the year at AA Binghamton. That season marked his final year as a pro.

Hunter then went on to his career as a coach, first in the minors and then in college. He served as hitting coach at short-season Salem-Keizer from 1998 to 2000, then single-A Hagerstown. He managed from 2002 to 2007 in the Arizona League for the Giants.

He has since joined Willimette University in Salem, Ore., as hitting coach. In March 2015, Hunter's daughter Deven Hunter played for Oregon State and the father spoke to The Salem Statesman-Journal about his daughter's toughness.

"She gets it from me, her mom, playing against her cousins when she was smaller," the father told The Statesman-Journal. "They were older than her and they used to pick on her and make her be tough. They were twins, so she had to go up against them in basketball, and they wouldn't let her score unless she was tough enough."
1990 Minor League Tally
Players/Coaches Featured: 2,403
Made the Majors: 985-41.0%
Never Made Majors:1,418-59.0%-X
5+ Seasons in the Majors: 411
10+ Seasons in the Minors:247
Posted by Steve78 at 6:00 PM