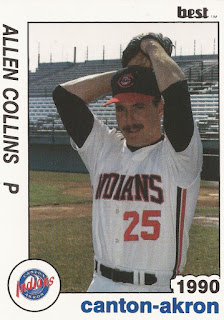 Collins went the distance, walking for and striking out 11 as Collins and his single-A West Palm Beach Expos won the game 1-0, according to The South Florida Sun-Sentinel.

Collins threw that no-hitter in his sixth season as a pro. He played two more seasons, making it briefly to AAA, but never to the majors.

The Ohio-native's career began in 1983, signed by the Expos as an undrafted free agent. Collins is also known by his full name, Allen Collins.

Collins started with the Expos at rookie Calgary. He went 5-3 in 15 outings, seven starts. He moved to short-season Jamestown and single-A Gastonia for 1984 and then back to Jamestown for 1985.

Collins moved to the Indians for 1989 and AA Canton-Akron, but he only got 11 outings, three starts. He returned to Canton-Akron for 1990. He gave up a three-run home run in a May game.