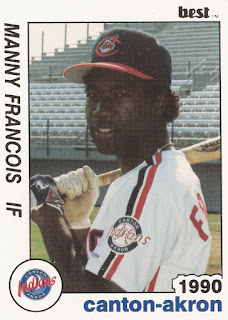 By the time this July 1988 game between AA Jackson and Manny Francois' San Antonio Missions was finally suspended at 2:30 a.m., the 25th inning had come and gone.

Neither team had scored.

"I've never played a game like this," the San Antonio infielder Francois told reporters after the game was suspended, "and I don't want to play a game like this game again."

Francois ended up playing a lot of games after that. He played two more seasons in the minors and he went on to a long career in Mexico. His career isn't credited as ending until 2001, as Francois played in Italy.

That July 1988 game between Jackson and San Antonio ended shortly after it resumed - on a bases loaded Francois walk-off single.

Francois' career began in 1984, signed by the Dodgers as an undrafted free agent out of his native Dominican Republic. Francois is also referred to by his given name, Manuel Francois.

Going into 1986, Francois was drawing favorable comparisons to Mariano Duncan. His season, though, turned out to be an abbreviated one. He got just 48 games between single-A Bakersfield and San Antonio.

His one big hit came in the continuation of that July 1988 contest, in the bottom of the 26th. With the bases loaded, Francois ended the game with a single.

"I'm batting in the fifth position, I knew I had a chance," Francois told The Associated Press afterwards. "I got the guys ahead of me who could get on base. In my mind, I just made my swing."

Francois returned to San Antonio for 1989. He then moved to the Indians and AA Canton-Akron for 1990 after a trade. His 1990 season, though, ended up being his last in affiliated ball.