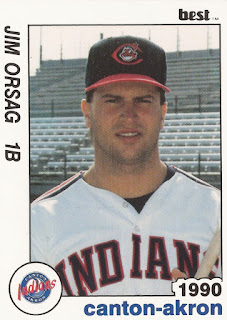 Red Sox minor leaguer Jim Orsag received some high praise in spring 1989 and it came from none other than Ted Williams himself, according to the Patriot Ledger Sports Service.

Williams looked at Orsag, according to the service, and called his swing the best in the organization.

Orsag had previously made it to single-A in his four seasons as a pro. He went on that year to see time at AA and at AAA. Orsag, though, never took his swing to the majors.

Orsag's career in 1985, taken by the Red Sox in the ninth round of the draft out of the University of Illinois.

He started with the Red Sox at short-season Elmira. He hit .226 over 66 games there. He then moved on to single-A Greensboro for 1986. He hit .271 that year and he made the league All-Star game. He even knocked in a run in the game itself.

Orsag hit single-A Winter Haven in 1987, going 3 for 4 in an April game. After playing 1988 at single-A Lynchburg, Orsag then made AA New Britain and AAA Pawtucket for 1989.

Orsag hit a three-run home run in a May 1989 game for Pawtucket. He then gave his team a lead with a single in a July game with New Britain.

Orsag is also credited as playing part of 1989 at AA Canton-Akron with the Indians. He stayed in the Cleveland system for 1990, seeing time at single-A Kinston and AA Canton. His season in 1990 marked his final as a pro.

Orsag has since returned to his home state of Indiana and taken up motorcycles, according to The Northwest Indiana Times.