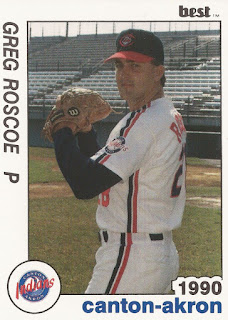 Greg Roscoe knew he had to pitch inside, he told his hometown Madison Capital Times. That's how it was in the pros.

"You can never really throw the ball over the center of the plate," Roscoe told The Capital Times. "If you make a mistake when you're ahead in the count, most of the guys will smack the ball."

Roscoe's pro career began that year in 1987, taken by the Indians in the ninth round out of UNLV.

At UNLV, Roscoe pitched two innings in a 1986 contest to record a save. In the ninth, he ran into some trouble, but he pulled through, according to The UNLV Rebel Yell.

"I was a little nervous when they got those two hits in the ninth," Roscoe told The Rebel Yell, "but you just try to keep the idea of a rally out of your head."

He moved to single-A Waterloo for 1988, also getting time that year at single-A Kinston. He went 5-5 over 17 overall starts, with a 3.74 ERA. Roscoe started the year with Waterloo, giving up six runs in just three innings of work.

"It was just one of those things," Roscoe told The Capital Times after that first start. "I felt good, I just wasn't putting it where I wanted."

He got his first look at AAA in 1991, with three games at Colorado Springs. He played the rest of the year back at AA. He also made the league All-Star team.

Roscoe returned to Colorado Springs for 1992. He got into 27 games, 20 starts, but it was his final season as a pro.