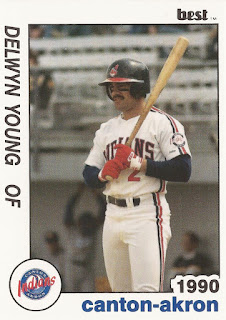 Delwyn Young had just stolen second and went to third on a wild pitch. Now, he was stealing home, racing for the plate, according to The Eugene Register-Guard.

Young was safe, a call not without an argument. Three on the opposing team, including the catcher, were tossed. The catcher later stated his firm belief that Young was out.

"The catcher didn't realize we were stealing," Young told The Register-Guard, "And I was safe."

The Register-Guard described Young's dash for the plate as similar to that of a teenager racing for a video game. Perhaps a better analogy would have been something like a new father racing home to see his newborn son.

This was 1982. Barely a month earlier, Young became a father, adding a new suffix his name, Sr. Young would go on to a 13-year career in the minor leagues. But, while the father would never make the majors, his son, Delwyn Young Jr., would.

Young Sr., began his professional career taken in the third round of the 1981 draft by the Reds. He made AA Vermont in 1985 and AAA Toledo in 1988. He played in the Mexican League in 1991 and in Taiwan.

His final minor league games were in 1994 at single-A Appleton, returning the next year as hitting coach, watching over a young Alex Rodriguez. In 1996, Young became hitting coach for the California League's Lancaster team, his son now old enough to be batboy.

Young soon built a batting cage for his son in their backyard. He also did everything else he could to help his son succeed. He also taught his son how to switch hit.

In 1999, the father had high expectations for his son, then a 16-year-old Los Angeles-area high schooler. And while his comparisons haven't quite held up, his son was taken in the fourth round. And he has become a major leaguer.

"My son is doing real well,'' Young told The Los Angeles Daily News in March 1999. "He has been around ballplayers all his life, and at this time I don't think Delwyn would be overmatched at the minor-league level. Realistically, I see him as a high major-league draft choice next year.

"I had Alex Rodriguez when he was 17 years old and Jose Cruz Jr. when he was fresh out of college, and Delwyn is right with them without a doubt.''