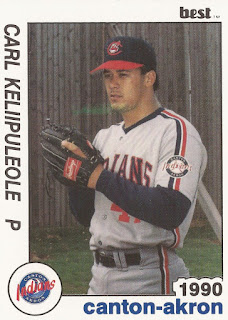 Carl Keliipuleole did his part to get his coach a milestone win in March 1986. The Brigham Young right-hander threw 8.2 innings against the University of Nevada Reno for a 9-5 win.

It was BYU coach Gary Pullins' 400 career coaching victory, according to The Deseret News. It was also part of a 16-6 record Keliipuleole over three years at the school.

It was a college performance that got the one-time resident of Hawaii drafted in the fourth round of the 1987 draft, taken by the Indians.

At BYU, Keliipuleole 16-6 record went along with an ERA of 4.98. Part of that ERA came in a May 1985 contest, where Keliipuleole gave up three crucial runs in relief, according to The News. He pitched the final two innings in a BYU win in April 1986.

After being drafted, Keliipuleole played 1987 at single-A Waterloo. There, he went 3-3 with a 2.43 ERA in 29 relief appearances.

He split 1988 between single-A Kinston and AA Williamsport. In 59 appearances between the two, Keliipuleole maintained an ERA of 2.65. In July, Keliipuleole pitched the final two innings in a Bills win for his first save, The Reading Eagle wrote.

It was in AA where Keliipuleole would stay. He moved with the Indians' AA franchise to Canton-Akron in 1989, his ERA moving too, up to 3.94. Keliipuleole also started 10 games that year, with an overall record of 5-5. In one contest, Keliipuleole gave up a run on an Andy Stankiewicz hit. Canton lost by a run, according to The Schenectady Gazette.

That off-season, the Indians purchased Keliipuleole's contract, but he returned to AA Canton for 1990. He went 5-9 with a 4.22 ERA in 19 starts and 27 appearances overall. By early September,r Keliipuleole was on waivers, Montreal claiming him.

He returned to AA with Montreal at Harrisburg. In six games, he had a 2.84 ERA. They were his final games in his career. His career ended short of the majors.