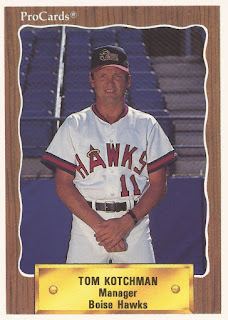 Tom Kotchman knew how to handle young clubs. He'd handled short-season clubs for a decade by 1999.

So, after a big Boise win early that season, Kotchman explained to The Eugene Register-Guard his team.

"This is the youngest club I've had here, and with a younger club you've got to be more patient," Kotchman told The Register-Guard. "I wasn't even with them the first week, I was still trying to sign players (as a scout for Anaheim), so I'm just about to put all the names with the faces."

Kotchman put a lot of names with faces over a career that's lasted now nearly four decades. He's served much of that time as a manager in the low minors and trying to find players as a scout. He's done all that after a brief playing career of his own.

Kotchman's career began in 1977 with the Reds. He played two seasons as an infielder at short-season Eugene and single-A Tampa. He hit just .191 for Tampa in 1978, ending his playing career.

Kotchman started his minor league managerial career by 1979, serving as manager at short-season Auburn. He made high-A Winter Haven in 1982, returning there in 1983.

At Winter Haven in 1983, Kotchman briefly watched over a young Roger Clemens. Kotchman relayed to MLB.com years later how Clemens refused to come out of a game late, saying he could end the game on three pitches and Clemens did.

He moved up to AAA Edmonton, managing there from 1987 to 1989. He then returned to the low minors to stay, taking over short-season Boise for 1990. Among the players he managed that first year a Boise: His brother Randy Kotchman.

He then stuck with Boise through much of the next decade. In 2001, his arrival at rookie Provo was delayed as he negotiated a contract for his son, first-round pick Casey Kotchman. Casey Kotchman went on to play a decade in the majors.

"You could feel his presence in the dugout," Provo centerfielder Nick Gorneault told The Deseret News of his manager. "He's all business. It's great to see him here."

Kotchman stayed with the Angels through 2012. He picked up his 1,500th managerial win in 2008. He's since continued as a manager for the Red Sox in the rookie Gulf Coast League, a job he continues to hold in 2016.

He's also continued his scouting work throughout his time.

"Kotch is a passionate coach who has done a nice job motivating and pushing young players to succeed," Ben Crockett, Boston's director of player development, told The Fort Myers News-Press in 2015. "He has been a valuable part of the development of so many players and is very unique in the way he impacts the organization in two separate areas."
1990 Minor League Tally
Players/Coaches Featured: 2,381
Made the Majors: 978-41.1%
Never Made Majors:1,403-58.9%-X
5+ Seasons in the Majors: 407
10+ Seasons in the Minors:244
Posted by Steve78 at 11:00 PM