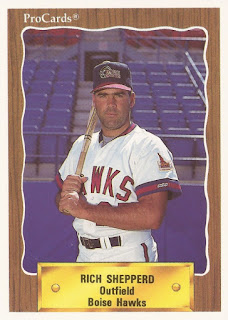 Rich Shepperd picked up his Cal Poly-San Luis Obispo team's first hit in this June 1989 game against Slippery Rock and it came in a big spot, according to The Pittsburgh Post-Gazette.

Down 4-2 with two men on, Shepperd launched a three-run home run, giving Cal Poly the 5-4 lead, according to The Post-Gazette.

Cal Poly went on to win that game. Shepperd went on to a pro career. His pro career, though, ended up being brief, just two seasons.

Shepperd's career began in 1990, signed by the Angels as a free agent the previous year out of Cal Poly.

At Cal Poly, Shepperd knocked in a run on an error in a May 1989 game. Shepperd hit .355, hitting eight home runs and collecting 54 RBI the previous year.

With the Angels, Shepperd hit the field in 1990. The outfielder played between high-A Palm Springs and short-season Boise. In 42 games between them, he hit .213.