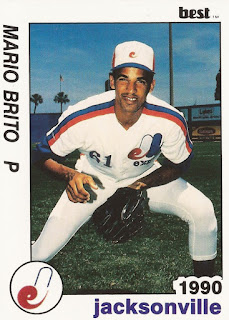 Mario Brito hadn't done well against Orlando during the year, he'd gone 0-2. But in the Southern League playoffs in 1990, the Jacksonville starter threw a complete-game shutout, The Orlando Sentinel wrote.

"Mario has been pitching well," Jacksonville Manager Jerry Manuel told The Sentinel. "He just outpitched the other guy. Lately, Brito has been the one to stop things that were going in the other direction. He has faced the storm and turned it around for us."

Brito was in his fifth professional season in 1990, making AA for the first time that year. He'd make AAA the next year. But he would never make the majors, his career detouring to Japan, Taiwan and Mexico before it would come to a close.

Brito's career began in 1986, signed by the Expos out of his native Dominican Republic. He played that year at the rookie Gulf Coast League. He hit short-season Jamestown in 1987, then single-A Rockford and single-A West Palm Beach in 1988 and 1989.

Then came 1991, and the trade to the White Sox. Brito landed with Chicago with Tim Raines. Brito was looked at for a possible spot in the White Sox bullpen, according to The Chicago Tribune.

His season started late, visa problems were to blame and his season went downhill from there. He didn't make the White Sox, starting the year at AAA Vancouver. By July, Brito had an ERA that topped 7 in 13 starts. An even worse number was his record: 0-10. He finished out the year at AA Birmingham.

Brito returned to the Expos system for 1992, playing much of the year at AA Harrisburg, as a full-time reliever. He then split 1993 between Harrisburg and AAA Ottawa. After a stint with the Brewers at AAA New Orleans in 1994, Brito went to Taiwan, and his native Dominican Republic.

In the Dominican Winter League, Brito earned a league record 19 saves, and an invitation to Marlins spring training.

"He pitched great," Marlins GM Dave Dombrowski told reporters early on. "He was about as unhittable as you can become. His split-finger has made a big difference for him."

Brito, however, gave up a solo home run in his first outing of the spring. The final verdict from the Marlins, according to The South Florida Sun-Sentinel, was that he fast enough for the majors.

Even with the Marlins' bullpen ailing in April, Florida sold Brito to Japan, to the Yomiuri Giants. With the Giants, Brito took the roster spot of Jeff Manto. Brito later played in Mexico, ending his career without making the majors.