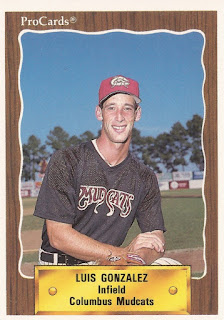 Closing out the 1993 season, Luis Gonzalez needed one hit to reach a milestone.

In only his third full season in the majors, Gonzalez had a .300 batting average within reach and he got it, a single putting him over the top.

"To hit .299 would have been a good year," Gonzalez told The Chicago Tribune the next spring, "but .300 sticks out a lot better when you've finished your career and look back."

While that hit in 1993 put Gonzalez at the .300 mark, a mark he would reach four more times in his career, it's another hit, achieved on the biggest of stages and the biggest of moments, that is the Gonzalez hit that would come to stick out most.

Gonzalez' road to that moment, though, began in 1988, taken by the Astros in the fourth round of the draft, out of the University of South Alabama.

Gonzalez spent his first two seasons at single-A, moving to AA Columbus in year three. By the end of year three, Gonzalez was in Houston.

By that July, Gonzalez was on a roll, arriving at Chicago's Wrigley Field, a place where he always seemed to hit well, he told The Tribune. In one game, he hit two home runs.

"I feel comfortable and confident here," Gonzalez told The Tribune afterward. "My rookie year, I got a couple of hits off Greg Maddux here, and that turned around my whole season."

After a season with Detroit, Gonzalez arrived with the Diamondbacks, the team for which he would have his best seasons, including his four other .300 seasons.

"A day like today," Gonzalez told The Associated Press after that game, "every time I came to the plate, I had runners in scoring position. When I have that, I just try to hit the ball hard in play."

Gonzalez led the Diamondbacks all the way to the World Series. In Game 1, he went 2 for 5, with a home run, helping Arizona to a 9-1 win.

In Game 7, a bloop single was all Gonzalez needed. And he got it off none other than the Yankees' Mariano Rivera in the bottom of the ninth, knocking in the game-winning and series-winning run.

"Stepping up to the plate there in the ninth inning, that's what everybody dreams about," Gonzalez told reporters afterward. "A key situation to drive in the winning run in the World Series, against one of the best relievers in all of baseball. I choked up (on the bat) and to be honest with you that was the first time I did it all year."

Gonzalez went on to play five more seasons with the Diamondbacks, seven more overall. He was an All Star three more times, making five All Star selections overall. He last played in 2008.

He formally announced his retirement in August 2009. He has since gone on to spend time as a Diamondbacks broadcaster.

"I still feel I can play. It just didn't happen," Gonzalez told reporters then. "So this is a bittersweet day or me. It's tough to close the book on something you love to do.