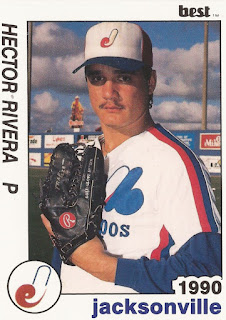 He also won Florida State League Player of the Week honors that month, throwing a complete game. Soon, Rivera found himself moved up to AA Jacksonville, but he couldn't keep up the pace.

Slowed by injuries, Rivera's career would end a season later, without Rivera making the majors.

A native of Mexico, Rivera joined the Expos system in 1987, signed as a free agent. He played that season at the Gulf Coast League Expos, going 5-8 with a 2.70 ERA.

He wasn't credited with playing in 1988, but returned for 1989, The Sun Sentinel in April 1989 citing previous arm problems. Rivera pitched that year for single-A West Palm Beach. On the season, he went 7-3 with a stellar ERA of 1.83.

Rivera started off the year with an 11-strike-out effort against Oceola, but he was also credited with the loss.

Moved up to AA Jacksonville, Rivera got five starts, posting a non-stellar 5.33 ERA. He was one of several West Palm Beach Expos to get moved up.

"We always kept a pretty decent team here, but we started the season with a great club," West Palm Beach Manager Felipe Alou told The Sun-Sentinel at year's end.

He returned to Jacksonville for 1990, getting 18 starts. He went 6-6 with a 3.60 ERA. In early June, he went 5.1 innings, giving up one run and four hits and got the win. Soon after, he went on the disabled list with a shoulder injury, The Orlando Sentinel wrote. He came back in early July on a pitch count and pitched five innings, part of a combined three-hitter.

Rivera was cited in spring 1991 as having a sore arm. But he wouldn't return. He had played his final season in the United States, his career ending after without getting higher than AA. He is credited, though, with continuing playing in his native Mexico, last playing in 1996 with Tabasco.