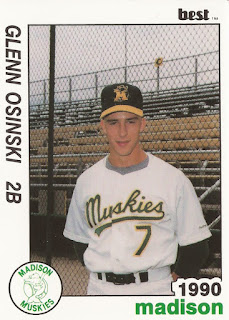 The Modesto Athletics rallied for three runs in the fifth inning of this May 1991 game and Glenn Osinski helped start the rally, according to The San Bernardino County Sun.

Osinski knocked a single with one out and eventually scored. His Modesto team went on to beat rival High Desert by a 7-5 score, The Sun wrote.

Osinski played for Modesto that year in his second season as a pro. It was also his final season. He never made AA.

Osinski's career began in 1990, taken by the Athletics in the 29th round out of the University of New Orleans. He went to New Orleans out of Triton College outside Chicago. Osinski is also credited as Glen Osinski.

At Triton, Osinski is counted among a long list of alums who went on to the pros. In 1989, he won honorable mention junior college All-American honors.

Osinski started is pro career with the Athletics at short-season Southern Oregon and single-A Madison. He got into six games at Southern Oregon, getting six hits in 30 at bats. The Shortstop then moved to Madison, hitting .249 in 54 games there.