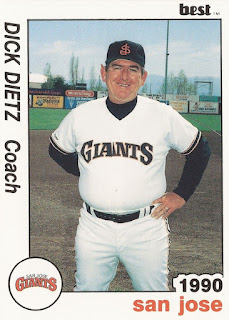 Dick Dietz took two steps toward first base and was immediately called back by the umpire, he recalled years later to UPI.

It was May 31, 1968 and Dietz had just been hit by a Don Drysdale offering with the bases loaded. Had Dietz been awarded first, a run would have scored and Drysdale's record-setting 58.2 scoreless inning streak would have been stopped at 45.

But the streak went on, because umpire Harry Wendelstedt ruled Dietz intentionally let himself get hit, UPI wrote. Dietz, who went on to harmlessly fly out, disagreed.

Dietz went on to a major league career that spanned eight big league seasons, mostly serving as a catcher for the Giants. He posted a career batting average of .261, hit 66 home runs and was legitimately hit by a pitch 13 times. He also went on to a brief coaching career, one with the team where he played the most, the Giants.

But, when he passed away in 2005 from a heart attack, it was that phantom hit-by-pitch extending Drysdale's scoreless streak that was the highlight that made it into the headline announcing his passing.

Dietz' professional career began in 1960, signed by the Giants as a free agent. He played his first season between Class D Artesia and Class C Fresno.

In 1970, Dietz got off to a hot start, hitting .331 over the first half. He also hit 18 home runs and knocked in 75, The Associated Press wrote. It was enough for Dietz to be named an All-Star.

"The main difference between my play this year and in past years is that I am relaxed," Dietz told The AP after his selection. "It makes a difference when you come to the park everyday and know you are going to play."

For Dietz, his All-Star nod got even better. He not only got into the game, but he also hit the game's only home run. That home run also started the late rally that led to the National League victory, The AP wrote.

After being out of baseball for more than 15 years, Dietz returned to the game in 1990, serving as hitting coach with the San Jose Giants. By 1993, Dietz was the team's manager, serving in that capacity for two seasons, but he never made the majors as a coach.