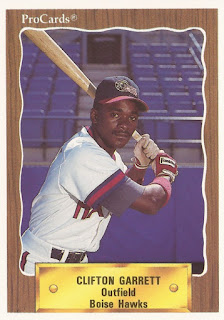 Clifton Garrett played his high school ball at Chicago's Roberto Clemente High School with his brother Barry Garrett. His coach there, Rich Tomoleoni, talked the pair's pitching skills up in May 1989 to The Chicago Tribune.

"The Garrett twins have dominated," Tomoleoni told The Tribune. "When either Cliff or Barry are pitching, on any given day they're capable of throwing a no-hitter."

While Barry Garrett doesn't appear to have played beyond the amateur ranks, his brother Clifton Garrett did. Clifton Garrett went on to a pro career that spanned five seasons - in the outfield. He made AA, but he never made the majors.

Clifton Garrett's career began that year in 1989, taken by the Angels in the 13th round of the draft out of Roberto Clemente in Chicago.

He started with the Angels in the rookie Arizona League. He hit .320 in 34 games there. He then moved to short-season Boise for 1990. His average there dropped to .203 over 53 games.

Garrett made AA briefly in 1993, getting 11 games at Midland. He got another 36 games at single-A Cedar Rapids. He hit .331 overall in his 41 games that year, but that season turned out to be his final season as a pro.

Garrett soon returned to Chicago. In 2013, his son, Clifton Garrett, Jr., signed as a top football recruit with LSU. The father told 247Sports.com his influence on his son.