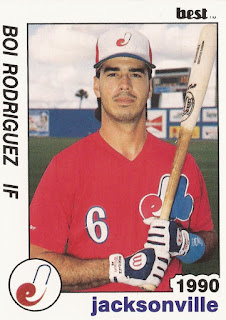 Boi Rodriguez started his career in the Expos system, making it to AA Jacksonville in his third season and returning there in his fourth.

He then got traded to the Braves for 1991 and took that next step, playing much of that next season at AAA Richmond. Then his advancement stopped.

"People who get traded to Atlanta are in trouble," Rodriguez lamented to The Pittsburgh Post-Gazette in 1995 after spending four seasons in the Braves system without seeing Atlanta. "You either move slow or don't move at all."

Rodriguez hoped to take that final step with the Pirates in 1995. He went on to play professionally for another decade, playing in Mexico and even Japan. He never made the majors.

Rodriguez' career began in 1987, taken by the Expos in the fourth round of the draft out of Indiana State University.

At Indiana State, Rodriguez smacked an 11th-inning triple in May 1986 to send his team on to the College World Series.

With the Expos, Rodriguez started at short-season Jamestown. He hit .281 over 77 games. He moved to single-A West Palm Beach for 1988, then AA Jacksonville for 1989.

Rodriguez hit .247 that year at Jacksonville. That August, he picked up two doubles in a Jacksonville win. He then returned to Jacksonville for 1990, increasing his average to .281.

He joined the Pirates in time for replacement ball in 1995 and chafed at the pressure from the union. He questioned what the union had ever done for minor leaguers, The Associated Press wrote.

Rodriguez ended up playing 11 games for AAA Calgary that year then he returned to Mexico. He played in Mexico through 2001, then got his opportunity in Japan.