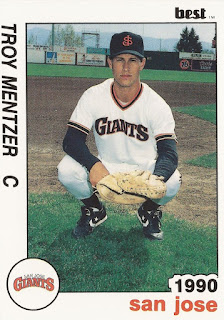 Troy Mentzer broke out of a slump and he broke out of it in a big way, with two home runs, The Lawrence Journal-World reported.

What the catcher's coach at Kansas University believed Mentzer needed was confidence, the coach told The Journal-World.

"I BELIEVE in talent," KU coach Dave Bingham told The Journal-World in March 1988. "Troy Mentzer is a tremendously talented young man. He fights himself sometimes, and when he does, that hurts him. He needs somebody to show him confidence, and that's what I'm trying to do."

Before turning pro, Mentzer played at Allen Community College in Kansas, then Kansas University. He bypassed a selection by the Phillies in 1987, but instead turned to Kansas.

Arriving at Kansas, Mentzer was called Bingham's "most impressive recruit," The Journal-World nothing Mentzer had hit .406, with 13 home runs the previous year at Allen.

With Kansas, Mentzer hit a home run and knocked in three in a March 1988 game. In a March 1989 game, Mentzer picked up three hits, including a double.

"I'm being real aggressive at the plate," Mentzer told The Journal-World after that March 1989 contest. "Last year I wasn't aggressive and I got in the hole all the time."

That June, Mentzer signed with the Giants. Sent to short-season Everett, Mentzer got into 29 games. He hit just .193, knocking in 12.

He returned to the Giants for 1990, assigned to high-A San Jose long enough to be included in the club's ProCards set that year. Mentzer, though, never got into a game, ending his brief pro career.