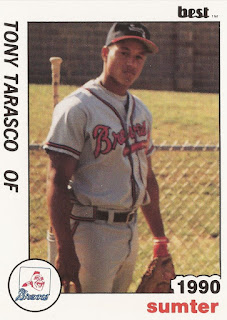 Tony Tarasco recalled not wasting any time getting to Atlanta, according to The Associated Press.

That was because the Braves prospect was getting called up to the majors for the first time, The AP wrote.

"I was on a plane for Atlanta less than two hours after (Richmond manager) Grady Little told me," Tarasco told The AP after his April 1993 call up. "I felt like a 12-year-old that first game."

Tarasco went on from there to play in eight major league seasons and later become a major league coach. For Tarasco, though, he is perhaps best remembered for a single play - one involving an actual 12-year-old: Jeffrey Maier.

Tarasco's career began in 1988, taken by the Braves in the 15th round of the draft out of Santa Monica High School in California.

Tarasco's early years in Santa Monica were marked by Tarasco spending time in a gang, according to The Baltimore Sun. It was his friends in the gang who encouraged him to pursue his baseball career.

"He's overcome a lot in his life," Orioles assistant GM Kevin Malone told The Sun in early 1996, "and I admire him for that. . . . I think there's a toughness there in him. More than a physical toughness a mental toughness."

With the Braves, Tarasco played his first year in rookie ball. He made single-A Sumter in 1989, then AA Greenville in 1992. In 1993, he made AAA Richmond and then major league Atlanta.

Tarasco's 1996 campaign was limited to just 31 games, but he made the Orioles' post-season roster. He also was on course for his encounter with the 12-year-old Maier.

In Game 1 of the American League Championship Series, Tarasco was put in as a late-inning defensive replacement in right. Derek Jeter launched a ball to the right field wall. As Tarasco seemingly prepared to catch it, Maier scooped it into the stands.

The umpire missed it. It was a home run. Tarasco vehemently protested, but to no avail. The Yankees went on to win. (The video of the Maier play)

Tarasco returned stateside in 2001 and he returned to the majors in 2002. He got into 60 games for the Mets that year, ending his career.

By 2006, Tarasco was a hitting coach in the minor leagues at short-season Vermont. He moved to single-A Hagerstown in 2008 and then served as Nationals minor league outfield coordinator in 2010. In 2013, he returned to the majors as Nationals first base coach.

"A lot of what I'm doing is preparation," Tarasco told MASNSports.com of his new role in spring 2013 for Davey Johnson's Nationals. "I help the guys prepare, I help Davey's team get ready to play."