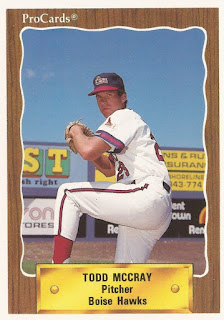 A recent transfer to the University of Florida, Todd McCray started rough in this February 1989 game but then he settled down, according to The Gainesville Sun.

McCray got out of a first-inning jam and then went on to go six innings, giving up a single run, The Sun wrote.

"In the first inning I was about to die," McCray told The Sun. "I was so nervous I was just trying to get it to the plate and hope they hit it to somebody."

McCray went on from Florida to move to the pros. His pro career ended up being brief. He played two seasons. He never made AA.

McCray's career began in 1990, taken by the Angels in the 17th round of the draft out of Florida. McCray went to Florida out of Santa Fe Community College in Florida.

At Florida, McCray threw a complete game an April 1989 game. He picked up the final out with the tying run on in a February 1990 game. He took the loss in a March 1989 game against rival Florida State after two weeks off, giving up five runs in an inning.

"I don`t have an excuse," McCray told The South Florida Sun-Sentinel after that loss. "They strung some hits together because I was getting the ball out over the plate. Pitching more helps your location, but I should have done better."

With the Angels, McCray played his first year at short-season Boise. He got into 17 games, starting seven. He went 1-1, with a 3.65 ERA.