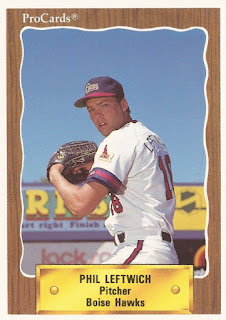 Pitching for a longer stay in the majors in May 1994, Phil Leftwich came through for the second time, according to The Los Angeles Times.

Leftwich pitched into the eighth inning against the Blue Jays, giving up two earned, after doing the same and allowing no earned his previous start.

Leftwich went on to start 20 games for the Angels in the strike-shortened 1994 season, his second in the majors. He returned to the bigs briefly two years later, marking the extent of his career.

Leftwich's career began in 1990, taken by the Angels in the second round of a draft out of Radford University in Virginia.

In July 1993, Leftwich debuted in Anaheim. He started 12 games for the Angels, posting a 3.79 ERA. He threw a complete-game in September, missing a shutout in the ninth by giving up a run. His first big league win came in August, a lopsided 14-2 victory over the Mariners.

"I don't want to make it sound like I'm disappointed," Leftwich told The Times of the blowout first win. "It's just that there wasn't a whole lot of drama. Once I was given a couple of touchdowns, it kind of changed the whole face of the game."

He hoped to make his return in 1996 with the Angels - after a big increase in his family. He and his wife had triplets late the previous year, bringing their number of kids to four.

"Having to pay for four college educations has rejuvenated me quite a bit," Leftwich told The Times.

Leftwich returned to the Angels, but started just two games. In 7.1 innings, he gave up six earned, ending his major league career.