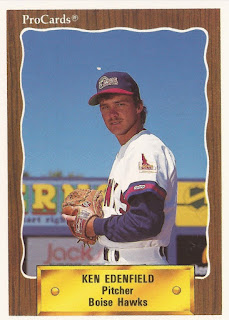 Ken Edenfield called many places home on his way to the majors. His wife Toni did, too.

Talking to Baseball Weekly in 1996, Toni Edenfield recounted the sacrifices that came with being a baseball wife, including putting her own career on hold for her husband's.

"I was giving up something," Toni Edenfield told Baseball Weekly, "but I didn't mind because this was Ken's dream ever since he was a kid."

The couple's sacrifices paid off first in 1995 as Edenfield made the majors with the Angels. They paid off again with a brief return trip in 1996. In all, Edenfield pitched in nine games for California, marking the extent of his major league career.

Edenfield's career began in 1990, taken by the Angels in the 21st round of the draft out of Western Kentucky University.

Edenfield started with the Angels at short-season Boise. He got into 31 games in relief, picking up eight wins and a 1.65 ERA. He saved nine. He pitched two scoreless in a July game for his fourth save.

Edenfield picked up nine relief wins for Vancouver in 1994, posting a 3.39 ERA. He went 4.1 innings in a September game, giving up a single run.

In 1995, Edenfield got his first shot at the majors. He got into seven games, debuting in June. He gave up six earned in 12.2 innings of work.

Edenfield took part in a spring no-hitter the next year. He pitched an inning of a March 16 no-hitter against the Giants. He then started the year with the Angels. He got into two games, giving up a two-run home run to Frank Thomas in his second.