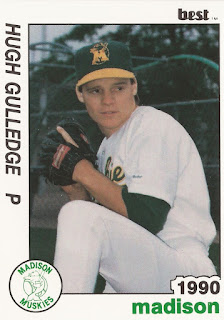 Going into the 1992 season, The Reno Gazette-Journal offered profiles of the incoming Reno Silver Sox, among them Hugh Gulledge.

A pitcher and Alabama-native, Gulledge listed his favorite ballpark as Yankee Stadium and his proudest achievement as being drafted by the Athletics.

He also listed his heroes: His parents.

Gulledge went on to get into 44 games that year for the high-A Silver Sox, but he wouldn't get another chance to introduce himself to another city. That season marked his fourth year as a pro. It also marked his final season.

Gulledge' career began in 1989, taken by the Athletics in the 46th round of the draft out of Enterprise-Ozark Community College in Alabama.

Gulledge started with the Athletics in the rookie Arizona League. He got into 17 games, starting two. He ended with a 6.75 ERA.